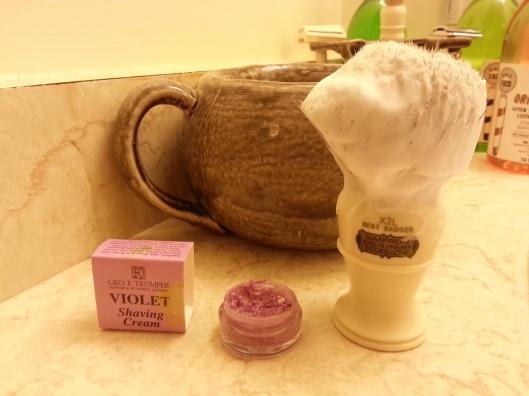 I found Geo F Trumper’s violet cream to be really lacking in slickness. To the point that upon my initial pass, having lathered it up to what usually works quite well for a consistency from most soaps, the razor was “skipping” across my cheek. More and more water eventually managed to wrest something usable out of it, but at the cost of what I consider to be an unacceptable degradation in lather thickness. All in all, it gave what I would consider to be a mediocre shave. And yes, if you’re keeping track, I do think this problem was worse than what I encountered with my last Trumper’s cream review.

The scent is, well, violets. Sweet and floral, I do kinda like it, although I recognize that there’s a lot of guys out there who would consider it to be far too feminine of a scent. As I said, I kind of like it, but I’ll give it a few bonus points for truth in advertising; if you’re looking for something that smells like violets, this smells like violets, and I can’t really ding it just based upon the fact that I’m not ecstatic about the aroma of violets.

But, as for the strength of the scent, it’s middling. As per usual, it’s quite strong in the pot, but when lathered up it loses a lot of its potency. It’s still there during the shave, but only just so.

So, overall, I’d say it’s a 4/10. The shave was sub-standard, and the scent isn’t good enough / potent enough to rescue it.