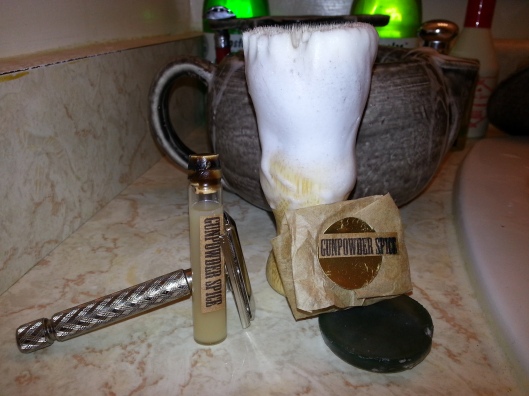 Edit: Before you consider purchasing anything from the Holy Black, you should be forewarned that since this review was written there have been many many reports from folks who had placed orders with the company only to never receive their products. I would strongly suggest not ordering anything from them at least until such time as these issues have been resolved.

The Holy Black Trading Company’s Gunpowder Spice shaving soap is a rather wonderfully scented shaving soap. It’s billed as “a mix between the classic Ol’ Spice scent with the added aroma of freshly fired black powder”, and I think that sounds rather accurate, including the sulphurous tang of the gunpowder, just enough there to give a kick to it. Quite a masculine aroma. I really liked it.

Strength-wise it was pretty much spot on, with just a bit of fading during the shave.

As for the lather, it performs similar to a lot of similar melt and pour soap bases, in fact I would say that I can’t really tell the difference between it and Mama Bear Soap, and I wouldn’t be surprised if they use the same base. It’s got a bit of a finicky balance of water required, you’ll want to avoid over-shooting it or it’ll get runny, but you can get a good balance of glide and thickness. The stability could have been a bit better, it did start breaking down a tad during the shave, but it was still usable.

I’ll say 8/10 overall. The scent is great, as is that of the matching aftershave balm.