I’ve been stuck shaving with the Derby Shaving Stick for about two weeks now, primarily because I’d been far too lazy in getting a review out the door and couldn’t justify moving on to a new soap when I have such a backlog of them to write.

I say stuck, because, well, I don’t really like it all that much. Don’t get me wrong, it lathers up easily enough, once you manage to dial in the right amount of water to use for the right amount of product (which can be tricky to control like all shave sticks). I’d say it’s comparable to the performance of Arko or Palmolive in that regard.

But I didn’t really like the scent. It’s generic “soap” type scent. Overall, I found it to be unpleasant. It’s fairly strong too, at least when not lathered. When just sitting in the bathroom with the top of the wrapper peeled off, the scent of the soap permeated my bathroom. Fortunately, the scent dissipated a bit once lathered up, but only dropped down from “really strong” to “fairly strong”. So, I suppose, also comparable to Arko in this regard too, although I think the scent of the Derby is slightly more palatable.

But yeah, overall, I’m not a fan. 4/10. But at least it is quite affordable, if that’s a major factor for you. 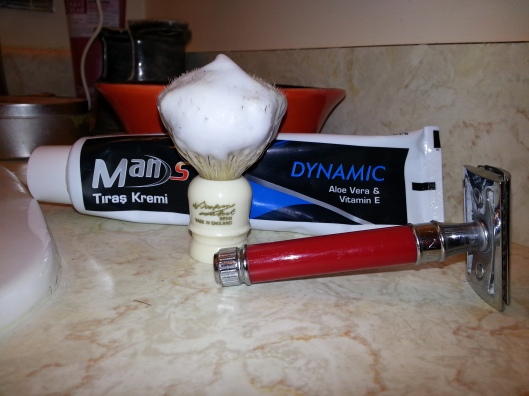 So, to follow on from a local soap which is terrible, next up we’ve got a cream from halfway around the world, which still isn’t very good at all! Hailing from Istanbul, Turkey, Man 5 shaving cream is, well, quite similar to the bulk of the cheap shaving creams that I’ve seen coming out of Eastern Europe.

The performance of the lather was, eh, I’d say sub-par. I wasn’t quite able to get as good of a balance between the required lubrication and the thickness of the lather, but it was certainly still useable, definitely on the thin side. Also needed a fair amount of elbow grease to get it to that level too. Nothing either good or bad to write about its moisturization, and the lather stability also left something to be desired. To call it a so-so shave would probably be pushing it.

The scent, well, it smelled pretty much exactly like the Ikar Tornado that I reviewed last week; reminded me of a herbal scent, with a fairly harsh chemical-y citrus layer. Not something I’d say smelled natural, or pleasant.

It was a bit stronger than the Ikar, lingering longer during, and even after the shave.

So, what can I say? All told, with both a poor lather and unpleasant scent, I’m gonna knock it down to a 4/10. 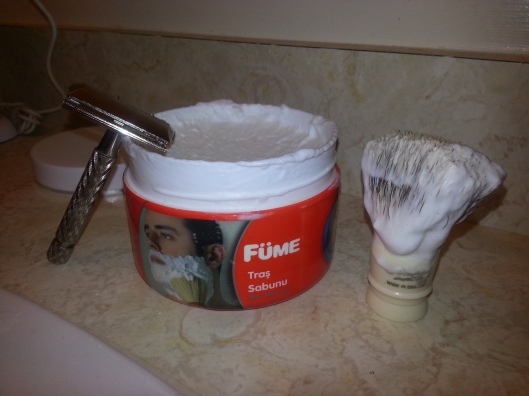 Next up, an entry a Turkish Entry, a shaving soap by the name of Füme. The site I purchased it from had listed both a “Cool” version and a “Lavender” version, however, as far as I can tell there was no visible difference in the packaging. The tub I got doesn’t list either of those terms (or a translation thereof). I’m just going to assume it’s the lavender version, since it smells a bit like that. If there actually is two different types.

The lather is honestly really rather good. It loads up and lathers quite easily, with an excellent balance of cushion and lubrication. Nothing that I really noticed with regards to moisturization, however.

The scent is mostly just a soapy scent with a touch, as I mentioned, of what I guess is a lavender note. Not really all that pleasant, although I wouldn’t call it “bad” smelling; not particularly strong however, which I suppose is a bonus.

This’ll be a 6/10 overall. The scent of course doesn’t really seem to do much to add to the experience for me, but if all that you’re looking for is a cheap soap that performs decently, this might do the trick. I’d have a glance at the ingredient listing before purchasing however.

So, Arko. I’ve heard a lot about Arko’s shaving stick, before I gave it a shot. It seems to be a “love it or leave it” proposition. Most of what I heard about it lead me to believe that I wouldn’t like it. I was right. The smell. It’s chemically, like a cross between medicine and cleaning product. I’ve heard comparisons to Borax tossed around, as well as urinal cakes, and “Ivory soap on steriods”. A bit more  kind of a comparison was probably to lemon pledge. Actually, yeah, I think the urinal cake comparison is probably the most apt (unused at least!). Strength-wise, it was definitely noticeable and never really faded all that much. Naturally, what  might be a good thing for a soap that smells nice is a bad thing for a soap that doesn’t.
But, anyways, Arko is mostly a popular soap mostly despite its scent, , not because of it, although there are indeed some people who like it. It performs well, and is insanely cheap to boot. It lathers up quite easily (I should note that it’s supposed to be particularly good for folks with hard water), nice and thick, good glide. Takes about what I’d say is a medium amount of water, and has a decently large “sweet spot”. I can’t say I noticed much in the way of moisturization after the fact. But still, a good shave and cheap.

Anyways, I still don’t like it. 4/10, the performance of the lather is
not, IMHO, good enough to rescue the stench..

Merry Christmas everyone! I hope Santa stuffed your stockings with some wonderful soaps! … just probably not this one.

The main thing that Arko’s Lemon shaving cream reminded me of was Lysol Lemon scented disinfecting wipes. It’s fairly lemony, but with a bit of a chemical tinge to it that somewhat blunted the pleasantness of the scent. Not terrible  per-se, but not generally something I’d plan to put on my face, y’know?

Strength-wise, it comes on reasonably strong, but fades a fair bit before the end of each pass.

Lather-wise, it was pretty decent. I would have liked a bit more slickness, but it lathered up really easily and provided a good amount of cushioning. It’s in the “good enough” category for sure. I should note that I’ve been told that Arko products are apparently especially easy to lather for those who have hard water. I’m blessed with rather soft water, so wouldn’t really know.

So, overall, I’d say it’s a 5/10. The smell is distracting enough to detract from the overall experience on its own, and it’s not exactly like it’s the most luxurious cream in the world to compensate.