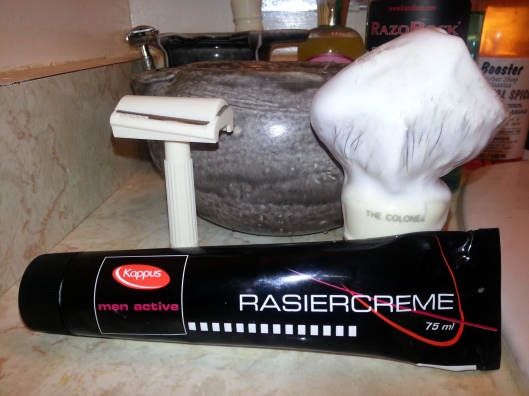 So, another instalment of “shaving creams that I’d never heard of but bought anyways because it was cheap and I was already ordering something from that place anyways”. Today’s guest star: Kappus Men Active

The scent is what I suppose I’d call a herbal scent. It most reminded me of the Kaloderma shaving cream I tried a few weeks back, also from Germany. The Italians seem to be obsessed with their sweet almond scented shaving soaps, perhaps herbal scents is a similar trend for German creams? Anyways, it wasn’t unpleasant or anything, but it just didn’t do all that much for me. It started off at what I’d consider to be a medium strength, and then faded a fair chunk during the shave.

The lather was pretty decent. Not really voluminous at all, I did find I ended up having to use a fair bit more than I would have for some other creams in order to get the lather needed. It whipped up thick, with a good amount of glide for a little bit of water, but a bit of experimentation showed that it did seem to have a reasonably wide range of allowable water content in order to get a decent shave. I didn’t really notice anything much in the way of moisturization after the fact. Still, a solid enough shave.

Overall, I’m going to say it’s a 6/10. It’s a solid middle of the road cream, nothing outstanding, nothing terrible. Decent price for what you get though.

So, I guess it was finally time to get around to reviewing some Proraso. Proraso’s Blue formulation is the newest cream they carry, having only come out late last year.

The scent is a bit difficult to describe. The most common example thrown out there is that it’s licorice / anise-scented, which makes sense given that there is indeed some licorice root extract in the cream, but it’s not just a licorice scent. It is tempered by something that I’d consider a fresh / green scent, which might be due to the aloe. There’s a also bit of menthol, although apparently not nearly as much as you’ll find in the Proraso Green.

Overall, I found it to be a pleasant scent. It wasn’t all that strong, just enough to be noticeable it you go trying to pay attention to it, but I couldn’t really tell it was there for most of the shave.

The cream lathered up easily, requiring very little water for a really thick lather that had good glide. I found this cream to be a fair bit above average in the moisturization department, which I’ll chalk up to the inclusion of the aloe juice, and perhaps the vitamin E.

Overall, I’ll say 7/10. Scent just doesn’t have the oomph to do it for me, but it’s a good shave otherwise.

Edit: It looks like the entire line has now been discontinued.

The last shaving cream I tried from Sultans Original was their now-discontinued Vanillawood, and I found the performance of this cream to be far better than that one was.

This is a rather soft sticky cream in comparison to the Vanillawood, which was more on the thicker side of the croap spectrum. The problems I had with the cream clumping together and resisting being lathered up were non-existent with this jar, either scooping some into a bowl for lathering, or loading up your brush directly in the jar.

It lathered up easily, and had what I would consider to be a very wide sweet-spot. A little water, a lot of water, it seemed to make it work regardless, Generally speaking when this is the case, I try to err on the side of less water, for a thicker lather, but this cream maintained a good level of thickness even with a fair bit more water than what was needed for a suitable level of lubrication. Pretty good moisturization-wise, overall I’d say a very fine shave.

The sandalwood scent was nice and sandalwoody (or at least according my my recollection of other sandalwood scented products, never actually having smelled real sandalwood!). Not too strong; enough that during the shave if I stopped and paid attention to it, I’d notice it, but not enough to really smell it without trying. Not much in the way of fading at the very least.

Overall, I’d say I’ll round this one up to a 8/10. I’d certainly recommend at least trying a sample pack of their new creams.

Ingredients: Not sure! They specify it’s a “Plant based shaving soap”, but don’t go into any more detail than that.

Art of Shaving was my introduction to the world of wet shaving, after a drunken purchase of one of their carry-on kits; pure badger brush, unscented shave oil, balm, and cream. I’ve since moved on to better things (seriously, that brush kinda sucks, and lord knows I rarely use unscented!), but it’s time to revisit the brand for a review!

The performance of the lather is much like what I remember, rather good. It lathered up quite well, although not all that voluminous, needing a medium splash of water. It provided very good glide with a reasonably thick cushion. The moisturization was not too shabby either.

The scent, meh. It didn’t really manage to avoid the whole “cleaning products” smell that a lot of lemon / citrus scents tend to get. Strength-wise, it also wasn’t there all that much, although given the above that might not have been a bad thing.

So overall, I’m giving it a 6/10. It give a pretty nice shave, but nothing desirable scent-wise.

Well, you asked for it, you’ve got it. Here is the current list of my top 10 favourite soaps and creams. I will be updating this list as I go, bumping scents off as need be. Also, I’ll be avoiding having too many similar scented ones on the list: there’s no need to have 4 Bay Rums for example. Also, max 2 spots per company. Gotta have a bit of variety to the list! Without further ado:

Edit: apparently the owner of the place that made the QEDman soaps for QEDman has retired; the line has been discontinued.

Pine and Cedarwood; a classic scent, done quite well. Of course, since this soap uses essential oils for its fragrance, this isn’t all that surprising. Strength-wise, it’s pretty good. About a medium level aroma, without any noticeable fading during the shave.

The lather is good; this is only the 2nd time I’ve used a shave stick, but unlike last time I managed to not use wayyyy too much. It gives a good balance of lubrication and lather with plenty of cushioning. I found I needed to add enough water until I just got to the point where it was just starting to thin out in order to ensure it had enough glide. No stability problems like I’d seen out of some other similar soaps, and an average level of moisturization.

A nice solid shaving soap, I can definitely see why its name gets so many positive mentions. 8/10.

The strength is quite strong at first, however it does fade off rather quickly, with not much being left by the time you get to the end of your pass.

The lather quality was good, as expected from the last time I tired Kiss My Face. A decent splash of water is needed to start the lather going, but that and a little bit of elbow grease produces a nice lubricating lather, with plenty of glide to it. It had what I’ve consider average moisturization properties; nothing outstanding, but no irritation or anything like that.

A rather solid 8/10 overall; wish it could have been a bit stronger on the strength. Still, a damned good value, considering the price.

Edit: Looks like this stuff has been discontinued. Sorry!

I’d consider this shaving cream to be yet another bit of evidence that inexpensive and cheap are not always the same thing.

It lathers up quite nicely. Very little water was needed to whip up a nice thick cream that still had plenty of lubrication and glide. Good lather stability, and the moisturization was pretty darned good as well. Left me feeling pretty damned good.

The scent is what I’d say is nice, but not great or good. Camomile, with a bit of what seemed like a medicinal tinge and maybe some other herbs, and a bit of a soapy undertone. Strength-wise, it’s just about right, reasonably strong without significant fading.

Overall, I will give this a 8/10. Pretty good value for the price. 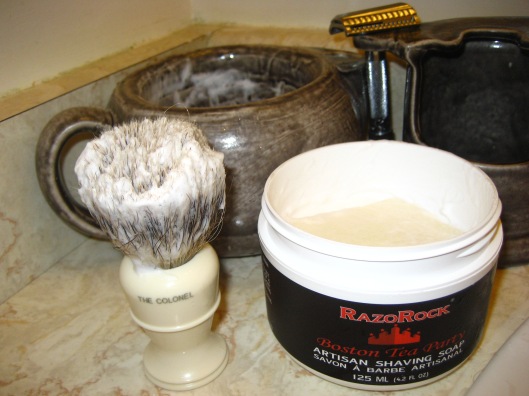 Edit: This soap has been discontinued

We were merry, in an undertone, at the idea of making so large a cup of tea for the fishes. – Joshua Wyeth

Personally, I think there’s a bit of a mis-match in the name of this soap, as I would have expected a black tea scent out of something named after the Boston Tea Party. But, instead we’ve got a green tea scent.

Update: Apparently I’m somewhat wrong! There was indeed some green tea thrown overboard at the Boston Tea Party, accounting for about 22% of the volume of the tea “used”.

It’s a nice fresh light scent, rather reminiscent of green tea with a little bit of something else I can’t place, something I think I’d say is in the “aquatic” family of scents.

It’s a bit hard to describe in part because it’s a light scent, and I’m sure most people reading this review are aware that I prefer my soaps to be reasonably strongly scented. This one isn’t all that strong in the tub, but once lathered, it’s really only barely noticeable while you shave.

As for the lather quality, well, as far as I can tell the only difference between this and RazoRock’s Caprician Lemon was the scent, both gave quite a spectacular shave. Very easy to lather up, with just a smidgen of water, it’ll produce a wonderfully thick lather with a lot of glide, and superior moisturization properties. Seriously top-notch.

So, overall I’m giving it a 7/10. A great lather, but not enough scent. There’s plenty of other soaps out there that provide both, or at least a better balance of the two.

So, I’ve finally gotten around to trying a sample of Castle Forbes, provided to me in a trade by a kind fellow redditor.

First-off, the cream itself is quite thick, honestly only a bit less thick than a few of the softer “croaps” on the market, such as RazoRock Cacao. It didn’t need all that much in the way of water to work it up, and did so with great vigour, producing a veritable mount of lather. What it did produce gave a really good glide, with a fairly decent level of thickness. After a bit of fiddling around with it, it seems to have a reasonably wide “sweet spot”, although it will start thinning out a fair bit as you add water past that.

The scent was a very nice heady lime scent. Which shouldn’t be all that surprising. It started off very strong, but did experience a fair bit of fading during the shave.

Overall, I’d say it’s a 8/10. It was good, I’d dare-say the best lime cream I’ve tried yet, although it doesn’t beat Mike’s Natural Lime if we’re including soaps in the equation.